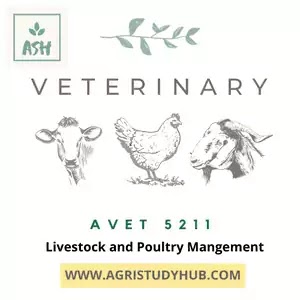 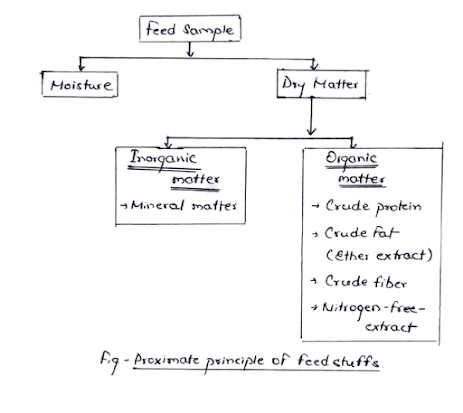 In proximate analysis, the first moisture content of the feedstuff is estimated. It is done by drying the feed-in hot air oven at about 100°C temperature for 24 hours.

The sample left after complete evaporation of moisture is called Dry Matter (DM).

The protein part of feeding stuff as determined in the routine analysis in real is made up of two component parts; one is the true protein occurring in larger proportions, the other consists of non-protein nitrogenous compounds. the term crude protein includes both types as a whole.

In proximate analysis, ether extract of feed sample is estimated by extracting it with fat solvents like petroleum ether, benzene, or diethyl ether. Ether is continuously volatilized, condensed, and allowed to pass through the sample at 55°C-60°C temperature, at which the solvent evaporates.

Crude fiber (CF) is also known as Dietary fiber and includes a variety of polysaccharide substances, viz., cellulose, hemicellulose, lignin plus gums, pectins, and mucilages. A widely accepted definition is “the sum of lignin and the polysaccharides that are not digested by the endogenous secretions of the digestive tract“

In proximate analysis, the estimation of crude fiber is based on treating moisture and fat-free samples with dilute acid and alkali. Fat-free feed sample (after extraction of Ether Extract) is subjected to boiling successively in acid and alkali. Then, the solution is filtered and filtrate/residue is dried. This dried residue contains Crude Fiber and ash/minerals. If this residue is ignited at about 600°C temperature till all carbon particles disappeared, the remaining part is ash. The Crude Fiber is calculated by subtracting the weight of ash from the dried residue before ignition.

It is the inorganic part of the feed, which is composed of various mineral matters. If dried feed sample is ignited at a temperature of about 600°C until all carbon particles are disappeared (generally for 2 hours), the remaining part is the ash (because at this temperature, all organic matter will be burnt, leaving white ash).

It is not analyzed, but calculated mathematically. Nitrogen-Free-Extract supposedly represents the soluble carbohydrate of the feed such as starch and sugar.

The TDN system, as a measure of feed energy, is very popular and widely accepted in our country India. This TDN (Total Digestible Nutrients) is based on an analysis of proximate principles in feed and dung. Its calculation involves chemical analysis plus biological evaluation (digestibility trial) of each nutrient component in the feed. Total Digestible Nutrients requirement is expressed as a kilogram (kg), and TDN content of the feed is expressed as a percentage (%) on a dry matter basis or on a fresh weight basis.

The other systems (Digestible Energy (DE), Metabolizable Energy (ME) and Net Energy (NE)) are based on the caloric value of feeds. They are usually expressed in kilocalories (kcal, 1000 Cal).