Food loss refers to the ‘decrease in quantity or quality of food’ in subsequent stages of the food supply chain from initial production down to final household consumption. On the other. hand “Food waste is part of food loss and is refers to discarding or alternative (non-food) use of safe and nutritious for human consumption all along the entire food supply chain” (FAO). Food losses occurring at the end of the food chain (From retail to the final consumption) are rather called ‘food waste’, which relates to retailers’ and consumers’ behavior. 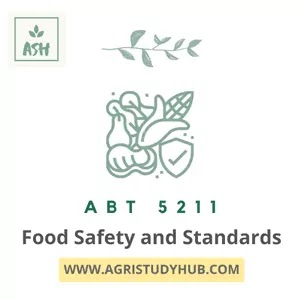 Food waste represents a large percentage of the biodegradable organic matter of both liquid and solid nature from many industries such as restaurants, food manufacturing, and processing facilities as well as other locations like supermarkets, schools, prisons, hotels, corporate offices, catering halls, food courts, etc. The waste may be accidental or intentional but ultimately leads to less food available for all. Most solid wastes are disposed of by returning them to the land, and wastewater is mostly discharged in nullah, drain, or river, after or without proper treatment. Food processing residuals frequently have no utility and must be disposed of in a manner that will preclude environmental pollution and public health concern so is gathering increasing interest and action.

It is important to initiate an analysis of the waste stream for facilities generating a large amount of food waste and existing circumstances, so that various alternatives can be properly evaluated. A waste audit or waste analysis can give valuable information about waste processing practices, as well as a roadmap for setting priorities and making prudent decisions, that are based on efficiency rather than guesswork. Below is a brief overview of some of the ways to address food waste:

Many opportunities exist for better utilization of food processing wastes, as a variety of processes have been developed for converting the waste materials into a new product(s), bio-fuels, food ingredients, and other valuable byproducts. Oftentimes food waste can be used in the rendering industry for converting these materials to soaps, cosmetics, cooking, other biowaste feedstock and even bio-diesel fuel. A good example of this is the preparation of Marmalade, where rind of Citrus is used after cutting it into thin slices.

2. Food Recovery at the Source

The food waste generated at the source like wholesale and retail outlets or Mandis can be utilized by providing it to the people in need. Although below mentioned practices are seldom followed in Indian conditions; the best possible solutions to reduce this waste can be as follows:

Sometimes there is a glut in the Mandis and there are very few purchasers. In this case likely to be discarded fresh fruits and vegetables can be collected from local or regional wholesale Mandis and then distributed to the needy people.

This involves, the first collection of likely to be unmarketable or returned processed foods that have a short to medium shelf life, from the manufacturing unit or retail outlet, then its distribution through networks. Here the food must be distributed well in advance so that it can be consumed before the last date of use.

A system where out-of-date but edible food is given to people in need via charities and food banks. Companies, charities, and individuals can all benefit from the redistribution of surplus food to those who need it as it is a win-win solution for food waste. This system is presently followed in Europe.

Food waste generated at food service establishments can be reduced by one or more of the practices are as follows:

This is the kitchen waste that is generated before the sales to customers. It is estimated that up to 10% of the food purchased ends up becoming. pre-sale food waste. To control waste during the food preparation stages some suggestions are as follows:

(a) be aware of the quantity and timing of food that is ordered.

(b) re-think production and handling practices.

(c) try to observe and pinpoint where most of the waste is occurring in the preparation process.

(d) take a closer look at the menu to see if certain items or groups of items account for most of the excess waste in the preparation stages.

This mainly involves waste from plates and order returns. Some suggestions for controlling this waste include:

(a) removing trays from the process so that patrons do not have a tendency to pile food upon the tray.

(b) controlling the size of the portions given to patrons, and

(c) modifications to the menus based on close observations by the staff as to what is being discarded most often by patrons.

Perishable and Prepared Foods donations: This involves the collection of extra food during the food preparation at facilities such as restaurants, food caterers, supermarkets, hospitals, nursing homes, schools, etc., and distribution the needy people. In this context, a very good initiative called community fridge has been taken at Chennai and Bangaluru. Here the excess or leftover foods from the households are kept in the refrigerator called ‘Ayamittu Unn’ or ‘The Public Fridge’ installed at a community place. The people who need it can eat at that place or take it home.

Secondary to the above-mentioned practices, there is a need to make food discards available for feeding animals. Feeding leftover food to cows is a very old practice in Hindu religion in India. In most parts of India food discards from food service establishments are collected in drums and carried over to feed piggery. On the other hand, food waste from the household is fed to pet animals like cows and dogs.

Apart from the methods discussed above food waste can be decomposed by digesting or drying. Digestion can be aerobic (composting) which generate compost and carbon-di-oxide or anaerobic generating digestate, carbon-di-oxide, and methane. In general, for decomposition, several questions are important such as space availability, staff resource for collecting and separating food scraps from trash, infrastructure availability, end-use for the finished product, local support, and cooperation or obstacles from nearby businesses or residences and approvals from local enforcement agencies. The methods of digestion or drying can be summed as follows:

In-vessel composting is the most preferred method for on-site composting. The vessel generally processes large amounts of waste without taking up too much space and can accommodate almost any type of organic waste. Here organic materials are fed into the vessel which has the mechanisms for turning or agitating the material for proper aeration. It can be used year-round in almost all climates (including extremely cold weather) since the internal environment is controlled, usually by electronic means. The process is fairly quick and can take as little as a few weeks. Some in-vessel systems are fully automated with sensors to monitor temperature, oxygen, and moisture and use bio-filters to reduce or eliminate odors. This is a good method for institutions with large amounts of compostable materials and limited space.

Here the organic waste is composted at a place other than its place of origin with the help of microbial activity, which can take several weeks or months. A very good example of this type of composting is the plant set up by the Mahindra group at Indore and Bhopal. At these plants, food and vegetable waste from the households of the town, after collecting through vehicles and separating at the plant itself are composted.

This process involves breaking down organic matter in an oxygen-free environment to generate biogas which can then be burned for energy. The material that remains after digestion (digestate) should then be composted aerobically to complete the process and produce a valuable soil amendment. In addition to energy production, another benefit of anaerobic digestion is that these systems require less space than many other large scales composting methods, which means they are easier to locate in urban areas

It can provide a fast, simple, and user-friendly onsite process for decomposing and dehydrating food scraps into rich soil sediments. Another benefit of Food Waste Drying Systems is that they do not require any micro-organisms, enzymes, freshwater, or other additives. In addition, they can be configured to extract animal oil for high-quality biodiesel refinement.