French bean (Phaseolus vulgaris) is an important leguminous vegetable. It is consumed as tender pods, shelled green beans, and dry beans. It contains proteins (1.7 g), calcium (50 mg), phosphorus (28 mg), iron (1.7 mg), carotene (132 mg), thiamine (0.08 mg), riboflavin (0.06 mg) and vitamin C (24.0 mg/100 g of edible pods). It is largely grown in hilly areas of Himachal Pradesh, Jammu and Kashmir, and north-eastern states during summer and winter, and autumn crop in parts of Uttar Pradesh, Maharashtra, Karnataka, Telangana, and Andhra Pradesh. In northern plains, it is cultivated on a limited scale as an autumn or spring crop, because of susceptibility to low as well as high temperatures. 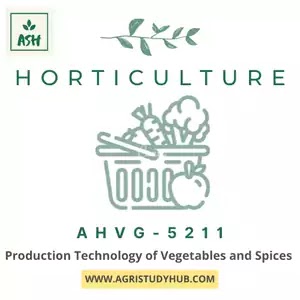 French bean is a warm-season vegetable that cannot tolerate frost. Its seeds do not germinate below 15°C and plants drop blossoms in hot or rainy weather. A mean air temperature of 20-25°C is optimum for its growth and high pod yield. Extreme high temperatures interfere with pod filling, while low temperatures are unfavorable for vegetative growth. A favorable soil temperature required is 18-24°C. French bean is grown over a wide range of well-drained, alluvial friable soils, but it cannot withstand extreme acidic and alkaline soils. Clay soils impede the emergence of seed growth leading to uneven or poor stand. The optimum soil pH is 5.5 to 6.8. Liming is needed if soil pH is less than 5.5. For optimum nitrogen fixation, good soil aeration is required.

The French beans are classified into string and string-less beans based on the extent of fiber in pods. Wax-poded varieties are not common and are mostly confined to the home gardens. The beans are grouped according to their growth habit-pole or climbing beans and bush beans, which are dwarf in nature. Important varieties grown in India are discussed here.

Arka Komal: A bush, photo-insensitive variety. Pods are light green, medium-long, straight, flat, and fleshy. Yield 18 tonnes/ha in 70 days. Released at the national level and is cultivated commercially in about 60% of the french bean growing areas throughout the country.

Arka Sharath: It is a stringless and round podded variety. Plants are bushy and photo-insensitive. Can be grown during all three seasons. Pods are ready for harvest in 45 days after sowing. Pods round on cross-section, stringless, smooth, long (15 to 16), and crisp with no parchment. Yield potential 20 tonnes/ha in 70 days.

Bountiful: Pods are borne in clusters on the main stem. Pod yield 10-12 tonnes/ha. Pods remain tender for 4-5 days after harvesting.

The soil has to be brought to a fine tilth by plouging, harrowing, and cultivating, and 25 tonnes of FYM is incorporated into the soil before sowing. Ridges and furrows are opened at 60 cm spacing and 250 kg neem cake per hectare is applied while forming ridges. A fertilizer dose of 60 kg N, 50 kg P₂O, and 70 kg K/ha is recommended. Half of N and full doses of P and K should be placed in bands 7-8 cm away from seed to avoid injury at the time of planting and the remaining N is top-dressed at flowering time. French bean also responds well to micronutrients. Foliar sprays of B, Cu, Mo, Zn, Mn, and Mg each at 0.1% are effective in enhancing quality and pod yield at the flowering and pod formation stage.

About 35-40 kg seed is enough for a one-hectare crop of bush bean, while 10 12 kg is sufficient for pole-type varieties. The seeds should be inoculated with strains of Rhizobium phaseoli for quick nodulation and high yield treated with its culture @ 30g sugar solution/kg seed. Seeds are dried in shade for about 2-3 hours before sowing. Optimum spacing is 60 cm x 10 cm for bush bean and 150 cm x 30 cm for pole type. Pole beans are spaced more between rows compared with a narrow spacing of bush beans. More plant population increases yield, but narrow spacing reduces the color intensity and uniformity of French bean.

French bean is sown from July to September and January to February in plains; March to the beginning of May in hills; September-November in southern India and October end in both north-east and central zone.

Enrichment of FYM with Trichoderma and biofertilizers

Well decomposed FYM is thoroughly mixed with Trichoderma harzianum, Azatobacter or Azospirillum, and phosphate solubilizing bacteria (PSB), all (@1 kg/ tonnes of FYM), moistened with sprinkling water and covered with plastic sheet or dried coconut fonds and kept to incubate for 15 days. This enriched FYM should be mixed with 10 tonnes of FYM before applying to the field.

After ten days of germination at the two-leaf stage, drench root zone with Captaf or Bavistin 2 g per Lettie. This will effectively control root rot diseases. At a two-leaf stage, spray vertimac 0.3 ml per liter to control stem fly (Ophiomia species). Aphids can be controlled by spraying Cypermethrin 0.5 ml per liter. To control rust damage after earthing up spray propioconozole @ 0.5 g per liter of water.

Beans are susceptible to injury during cultural operations after plants begin to flower. Cultivation or working among plants, where foliage is wet should be avoided because spores of anthracnose and angular leaf-spot diseases are easily spread under wet conditions.

Bush beans do not require staking, while pole varieties are staked for obtaining high yield. The vine grows clockwise around the support. Two wooden or iron poles are used at the two ends of the rows and lines of the wires are stretched. Gunny thread or fine rope is fixed in a zig-zag fashion between the lines of the wires. In temperate climates, pole beans are grown in a mixture of corn or okra as the stalk is used for support of the vines.

Annual grasses cause the main problem in the French bean planted early in the growing season. The weed crop competition starts 2-3 weeks after planting. Inadequate weed management practices reduce the yield drastically. In most beans, hoeing is done by hand. The narrow spacing reduces crop-weed competition and hoeing increases yield. About 2 weedings may be needed till the plant can smother the weeds. A pre-emergence application of Alachlor 2-2.5kg/ha is recommended for effective control of weeds.

French bean is shallow-rooted. It is sensitive to both water excess and water stress conditions. A good crop can be obtained, if a little moisture remains during the rainy season. About 6-7 irrigations are needed during the growing season. The plants are susceptible to water stress at critical periods of growth-pre-blooming, flowering and pod-filling stages. The frequency of irrigation depends upon the season, soil type, and organic-matter content. Thus, the moisture level should be near to field capacity. particularly during the flowering and pod formation stage. Deformed pods can result from water stress due to low moisture or excessive evapotranspiration losses. Flooding in french beans causes anoxia leading to root rot. Therefore, moisture should be evenly distributed throughout the growth period. About 150 to 400 mm of water is usually sufficient for French beans.

Flower initiation and development are greatly delayed under sub-optimal temperatures, especially below 10°C, where fertilization may not occur, producing small-and miss-shaped pods. Blossoms drop and ovule abortion are common problems at high temperatures (35°C). Therefore, planting crop at a suitable time and place are of utmost importance.

Transverse cotyledon cracking takes place when dry seeds of beans are sown in wet soils. This occurs since susceptible cultivars imbibe water rapidly. Seed moisture content below 12% also enhances the cracking of cotyledons. White-seeded cultivars are more prone to this malady. The resistant cultivars show germination of 60 to 80%, while susceptible ones 20% or less. Therefore, resistant varieties with hard seed coats, optimum seed moisture content, and planting of crops at a suitable time are essential to avoid this disorder. The necrosis of hypocotyl is associated with low Ca content in seed after germination. Soils rich in Ca and Mg offset this problem.

• Monitor the plants for stem fly adult activities, puncture marks, and petiole mining soon after germination. As soon as few adults of stem fly (small housefly-like insects) are noticed hovering over the crop, spray suitable pesticide. However, please note that the botanicals get washed away by rain and they will be ineffective if it rains within 1-2 days of spray.

• Second spraying is given when on an average 5 leaves/10 leaves have petiole mining symptoms or at 15 days after sowing. will also take care of the leaf miner. For leaf miners, do not repeat sprays again and again, as it will increase the pest population.

• During September-October after the onset of the northeast monsoon, hoppers become very serious causing withering of the foliage and plants.

French beans are harvested when pods are tender (approximately 10-12 days after flowering). Bush beans mature relatively in a short period of 45 days requiring 3 to 4 pickings, while pole beans take 60-75 days for maturity and 8-10 pickings can be made. The beans are generally harvested by hand. Delayed harvesting reduces the quality of pods as they become fibrous. Mechanical pickers are also devised for harvesting beans, especially for processing type varieties. These employ ‘Once over’ destructive harvest, which strips leaves and removes pods from the plants.

Shelled beans are harvested when their seeds achieve the full size and become relatively firm. Their seed moisture is very high compared with pods. The seeds are separated from pods and empty pods are discarded because these become fibrous. Shelled beans have the characteristics of the remaining firm.

Yield in French bean varies considerably with location, fertility of the soil, variety, and sowing season. The bush beans yield 12-18 tonnes/ha, whereas in pole-type beans 18 to 22 tonnes/ha can be harvested. The yield is generally high in a temperate climate when compared with tropical conditions.

French beans are highly perishable and rapid cooling after harvesting is important to maintain quality. After harvesting, beans are washed and culled and diseased, inferior pods are destroyed. Before these are placed in storage or transit, the beans should be cooled as rapidly as possible. Optimum storage and transit temperatures are 5-7°C. Under these conditions, storage life increases up to 20 to 25 days. At temperatures below 2.5°C, chilling injury occurs after 10-12 days of storage.

In India, bulks of French beans are consumed as fresh, while in advanced countries like the USA more than 80% crop is processed. Processors have strict requirements for specific varieties such as deep seed coat/white color and uniform crop maturity though white color is preferred. The varieties with fleshy pods are widely used for commercial freezing.